You are here::HomeBookmakers pay for bingo’s tax cut
Previous Next

In the 2014 Budget the Treasury has clearly made the calculation that bookmakers are a better prospect for future tax revenues than the bingo sector.
The two major statements on gambling in the 2014 Budget were the reduction of bingo duty to 10% (from 20%) and the increase on FOBT (B2) machine games duty (MGD) to 25% (from 20%).

The bingo sector had argued that reducing the rate of bingo duty could actually increase the revenues the Treasury took in bingo duty because bingo stakes would rise. In its submission to the Treasury ahead of the Budget the Bingo Association stated that “overall the bingo duty cut is expected to raise around £40m for the Exchequer over four years”.
But the Treasury clearly didn’t buy that argument as a reason for cutting the duty. In its forecasts the Treasury calculates that over the period 2014 to 2019 cutting the bingo tax to 10% will cost it £ 190 million in lost tax: £ 30 million in 2014/15, then £40 million in each of the subsequent four fiscal years.
Instead, the Treasury saw a much better bet in the bookmakers and has gone steaming in. It intends to soak as much money as possible out of the fixed odds betting terminals as possible by creating a new higher band of MGD at 25% from 2015.
By contrast with its forecasts for bingo duty, the Treasury believes it can take an additional £335 million from FOBTs between 2014 and 2019. The net effect is that cutting one and increasing the other will give the Treasury £145 million more in gambling tax duties over the five year (according to the government’s own forecasts). 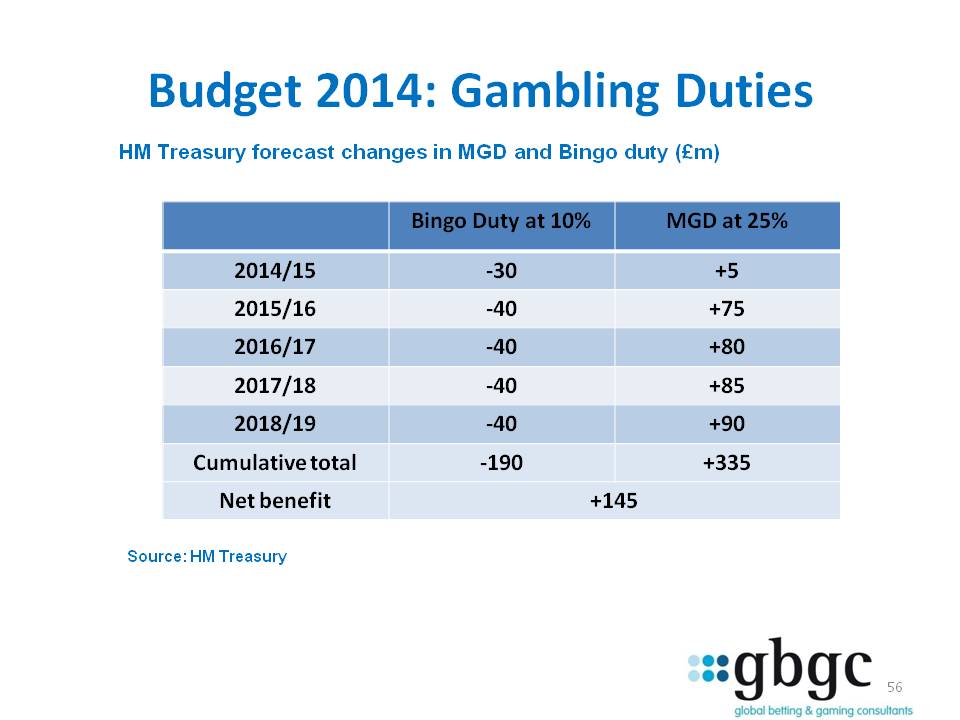 GBGC UK gambling tax duty changes
William Hill estimates that the higher rate would have cost it an extra £16 million if it had been in force last year.
The Association of British Bookmakers (ABB) is very clear on the impact the decision will have:
“Thirty percent of our shops, and many are small family run businesses, make less than £300 in profit a week. This knee jerk and ill-considered tax raid means their futures are now on the line.
There has been a lot of debate recently about the machine games we offer in our shops. An increase in MGD on B2 machines does absolutely nothing to address the concerns that have been raised, and will have absolutely no impact on levels of problem gambling in the UK – which remain low at 0.5%.
The licensed bookmaking industry is the only sector in the UK that pays more in tax than it generates in profits. The Government’s desire to continue to soak the industry undermines our ability to continue to support horse and greyhound racing. It will cost jobs and reduce the investment we can make in the research, education and training that’s needed to tackle problem gambling.”
On top of the increase in MGD, it appears that the likes of William Hill and Ladbrokes et al. will also have to pay horserace levy on their gross profits from offshore bets on racing (i.e. internet/mobile betting). The Treasury said it would consult on “extending the horserace betting levy to offshore bookmakers”.
Global Betting and Gaming Consultants’ director Lorien Pilling said, “the 2014 Budget held very little good news for the UK betting sector. Independent betting shops will be hurt particularly hard by the increase in MGD, whilst the internet sports books currently licensed offshore will be paying more through the horserace levy. In addition, the UK government is pushing ahead with its point of consumption tax on remote gambling from December 2014 with its high associated tax rate of 15%.”
He concluded: “From 2015 the costs of offering betting services in the UK will be substantially higher as a result of today’s Budget.”