You are here::HomeBeware governments bearing tax changes
Previous Next

When a government brings in a new mechanism through which to tax an activity it is 100/1 on that it is for the government’s benefit rather than for the poor sap that has to pay it. Such has been the case with Machine Games Duty (MGD).

MGD was introduced in February 2013 as a replacement for Amusement Machines Licence Duty (AMLD).
At the time the government stated that MGD was designed to be “revenue neutral” when it replaced AMLD. But it never said for whom it was designed to be revenue neutral.
The gambling industry assumed it meant revenue neutral for operators. In fact it meant revenue neutral for government.
MGD was initially set at a higher rate of 20% and a lower rate of 5% (for lower staking gaming machines).
Under the AMLD system, VAT was also paid on takings from gaming machines. MGD replaced both AMLD and VAT for gaming machines with cash prizes.
A prevailing view was that MGD was being introduced at 20% as revenge by the government for all the VAT repayment claims it has faced from gambling operators. The belief was that MGD is designed to “future-proof machines against further VAT claims”.

Former Economic Secretary to the Treasury Chloe Smith stated: “we have to undertake to protect the tax base in light of ongoing legal challenges”. This comment provoked anger amongst gambling operators because this tax argument was not raised in the consultation or discussions with government on MGD.
Can it be a coincidence that some of the biggest winners in the VAT reclaim cases are now some of the biggest losers in the impact of MGD on their business.

The 2014 Budget only made the situation worse when a new higher rate of MGD was announced at 25% of gross profits.
The Association of British Bookmakers was clear on the impact it would have:
“Thirty percent of our shops, and many are small family run businesses, make less than £300 in profit a week. This knee jerk and ill-considered tax raid means their futures are now on the line.
The licensed bookmaking industry is the only sector in the UK that pays more in tax than it generates in profits. The Government’s desire to continue to soak the industry undermines our ability to continue to support horse and greyhound racing.” 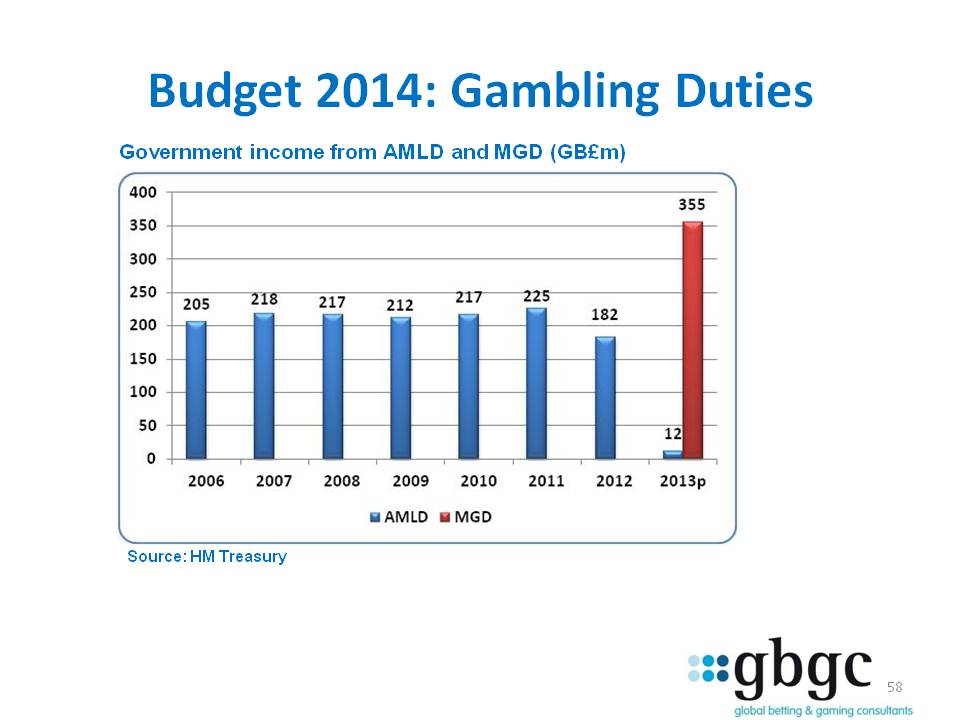 GBGC UK Machine Games Duty
The government’s own figures show the impact of the change in tax base. In 2012 AMLD (excluding VAT payments) brought the government GB£ 182 million in revenue. In 2013 the 11 months under MGD brought in GB£ 355 million (provisional figure February – December) plus GB£ 11.6 million in AMLD from the start of the year – a total of GB£ 367 million for the year.
Removing the element of VAT from gaming machines’ tax mechanism has certainly made it easier for the government to increase the tax rate of MGD whenever it feels the need. The new 25% rate of MGD will come into force in 2015 and, as a result of this higher rate, the Treasury forecasts that in the fiscal year 2015/2016 it will earn an extra GB£ 75 million from MGD and an extra GB£ 335 million over the five year period to 2018/2019.
And that’s how “revenue neutral” works.
By gbgcadmin|2014-03-28T00:00:00+00:00March 28th, 2014|Uncategorised|Comments Off on Beware governments bearing tax changes