You are here::HomeScandinavia: state lotteries are the e-gaming winners
Previous Next

The Scandinavian region, and Sweden in particular, has been the source of a number of leading companies in the internet gambling sector including the likes of Betsson, Boss Media, Mobenga, Net Entertainment, NYX Interactive and Unibet. But in 2014 Denmark is still the only Scandinavian jurisdiction in which private e-gaming operators can get a licence.
In each of the four countries there are some dominant state monopolies in operation (Danske Spil, Veikkaus Oy, RAY, Norsk Tipping, Svenska Spel) and the Scandinavian governments have been very reluctant to relinquish their hold over gambling and the associated revenues they bring in.

The population of Scandinavia is generally wealthy (by comparison with other European countries) and also quick to adopt new technology. This combination meant that the Scandinavian lotteries were some of the first to offer their games via the Internet and mobile phone. In Finland, Veikkaus Oy launched its online sales in 1997, after a successful pilot conducted in December 1996. Mobile gaming was piloted during 1999 and fully launched in the early 2000s. In November 2004 in-play betting was introduced via WAP and Internet. In June 2005 Veikkaus added an SMS gaming service for playing the lottery and betting games. By 2012 its internet and mobile sales were approaching €600 million. 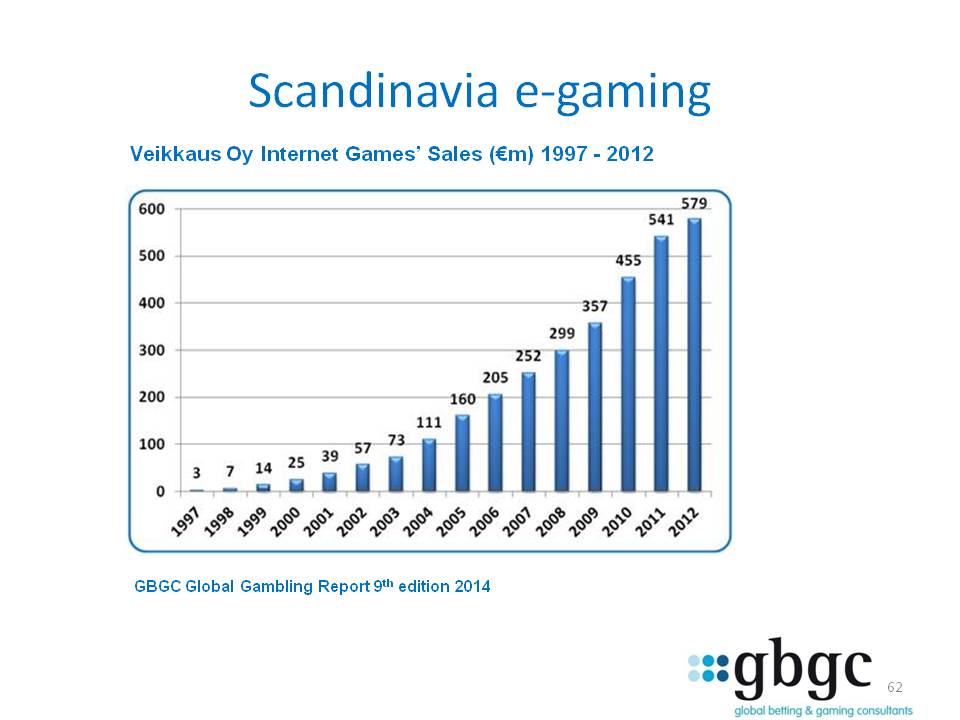 GBGC Veikkaus Lottery e-gaming sales
Over time these monopolies have gradually expanded the range of games they offer online to include the likes of keno and bingo, betting on sports and even the ‘harder’ gaming products like casino games and poker. The announcement in January 2014 that the Norwegian Lotteries and Gaming Authority had approved the expansion of Norsk Tipping’s online services to include casino games, bingo and instant win games (to be supplied by GTECH) means that all the four jurisdictions in the region will now offer some kind of online gaming through its monopoly.
In December 2005 Svenska Spel launched its own online poker room to respond to market demand and to attract some of the players already playing at foreign sites towards its own product. Within six weeks of its launch, 70,000 players had already registered accounts on Svenska Spel’s poker site.
Finnish Slot Machine Association (RAY) announced a four-year contract with Playtech in May 2010 for Playtech to supply RAY with a suite of internet casino and poker games.
Although originally planned to begin operations at the end of August that year, the launch period was moved twice, and the website finally became active on 29 November 2010. The payout of the slot machines is set between 92% and 95%, while RAY’s poker rake is between 2.5% and 3%.
One of the main reasons given by the various monopolies for launching online poker and casino games is to prevent their citizens from playing with offshore licensed operators. Linked to this is the stated aim of promoting responsible gambling.
RAY’s launch of its internet casino, for example, was delayed in 2010 due to the ‘tough demands’ of state officials. These demands included introducing a maximum daily bet limit of €500 for slots and table games. The maximum amount deposited in the betting accounts was set to €5,000 and there cannot be any refunding of the account between midnight and six o’clock in the morning.
Anne Mette Hjelle, director at Norway’s Lotteries and Gaming Authority, said that the Norwegian government believed that Norsk Tipping would be able to attract players away from “unlicensed” operators by expanding the range of games it offered online.
Like RAY in Finland, Norsk Tipping will have strict measures regarding responsible gambling. It will not attract players by offering financial incentives such as sign-up bonuses or free spins and any player who opts out of internet gambling will also be blocked from receiving marketing communications.
Norsk Tipping has also set loss limits. The daily, weekly and monthly gambling losses are restricted to NOK 4,000 (€485), NOK 7,000 (€845) and NOK 10,000 (€1,200) respectively in an attempt to prevent problem gambling.
Until the beginning of 2012, when Denmark began issuing licences, it was not possible for non-state owned operators to obtain an e-gaming licence in any of the Scandinavian jurisdictions. But the Scandinavian region was simply too good to ignore for e-gaming operators, with a good propensity to gamble, high use of the internet and mobile phones, and wealthy consumers, and they have offshore licensed firms have long targeted Scandinavia.
GBGC calculates that in 2010 76% of Scandinavian internet gambling (excluding lottery games) gross gaming yield (GGY) came from offshore licensed operators. With the launch of more games by the state monopolies and licenses becoming available in Denmark in 2012, GBGC forecasts that only 58% of GGY will be from offshore operators by 2017.
It is interesting to look at the situation in Denmark where private operators have been able to get a licence for the last two years. In 2010, prior to licences being available, just 16% of total internet gambling GGY in Denmark came from locally licensed operators i.e. Danske Spil. By the end of 2012 this percentage had leapt to 75%.
By the end of 2012 the Danish Gambling Authority announced that it had issued gaming licences to 39 operators, which received a total of 58 licences (different licences are required for online betting and online casinos). This is quite a large number of operators for a relatively small population. Early results suggest that some of the licence holders are not having as much success in the market as they anticipated, especially given the high tax rate. Of the 58 licences issued in 2012, 27 licences brought in GGY of less than DKK 5 million (€670,000) and 13 brought in GGY of over DKK 25m (€3.35 million). Perhaps not surprisingly, the strongest operator with the most recognizable brand is Danske Spil.
The company was reported to have a customer base of around 600,000 people, which is over 10% of the Danish population.
The situation in Denmark would suggest that state lotteries should not fear competition from private e-gaming operators as much as they do. As long as the state lotteries offer the games their players wish to play and with good payout percentages, they can be very successful in offering online casino and poker. This is precisely because people do trust them and the lotteries often have the scale and resources to dominate their own domestic market. The added bonus for governments is that many private firms seem very willing to obtain domestic e-gaming licences if they are available (and pay higher taxes). The result is both more tax income being generated and the state lottery generally maintains its market leading position too.