You are here::HomeUK bookmakers in decline
Previous Next

When a new Chief Executive takes over a public company it has become common practice that he writes off as much of the past that is possible to do so. There is good reason for this: it causes the share price to fall prior to his options being granted.

Jim Mullen, the new CEO at Ladbrokes, was true to the form book in the 2015 interim results when he wrote off some past software investment amongst other things, bringing the total write off to £85 million.

Over at William Hill, CEO James Henderson did not need to delve into the William Hill archives to find ‘exceptional items’ for his interim results. New regulation and taxes wiped £43 million off William Hill profits all by themselves.
The Ladbrokes and Coral merger will certainly bring about shop closures. As GBGC has said before in this newsletter the market will ultimately determine a viable number of betting shops on the UK high street. All the politicians have to do is be patient.
Under a FOI request, GBGC asked the UK Gambling Commission about the number of bookmakers that continued to have operating licences in the UK. The decline in the number startled even this old industry observer. 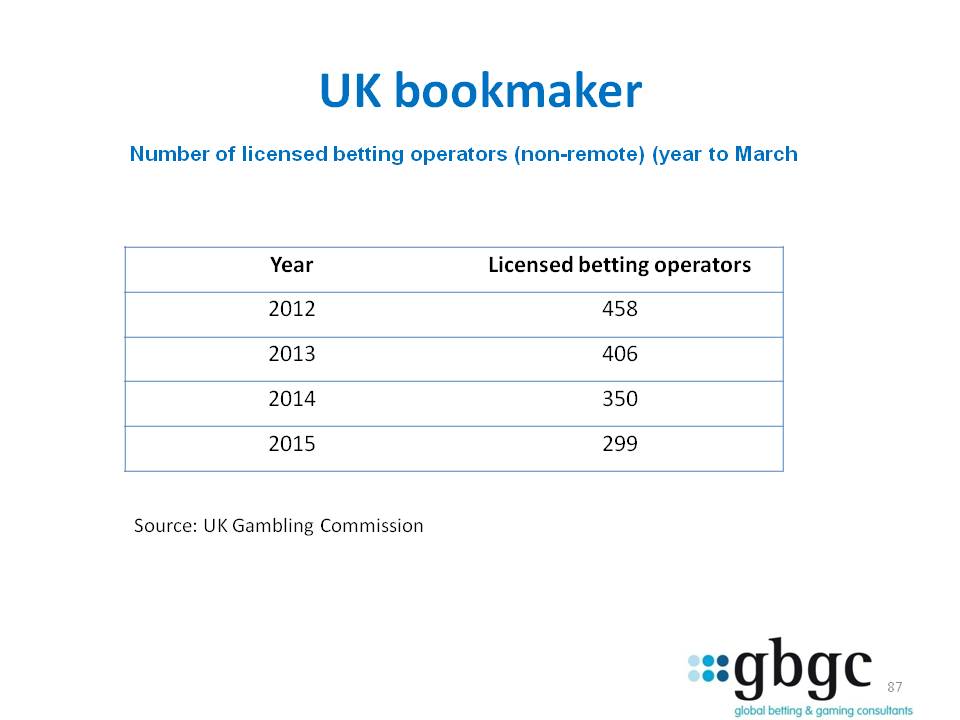 There is good reason to expect that even this figure is overstated because some companies licence their subsidiaries individually.
GBGC, therefore, estimates that in mid-2015 there are only 200 bookmakers now trading from betting shops in the UK.

When I was chair of the BBOA we had 680 members at the peak in 1998 and we did not even have every bookmaker as a member. We estimated there were about 1,350 bookmakers at that time.
The data suggests 50 (fifty) independent bookmakers are going out of business every year, or at least choosing not to renew their licence.
Betting has been under pressure for quite a few years now. There have been more television programmes on “addictive gambling”. The most recent BBC series Britain at the Bookies was perhaps more balanced than most but nevertheless still spent an episode highlighting the behaviour of those with addictive gambling problems.
The big bookmakers, clearly concerned about the deluge of bad publicity being thrown at them, have launched the Senet Group, the aim of which is to promote responsible gambling standards. They are taking a leaf from the book of the alcohol industry.
Drinkaware and the Portman Group have been leading the call for responsible drinking since 2006. They have had a great deal of success. Alcohol consumption since 2006 is down 16%. 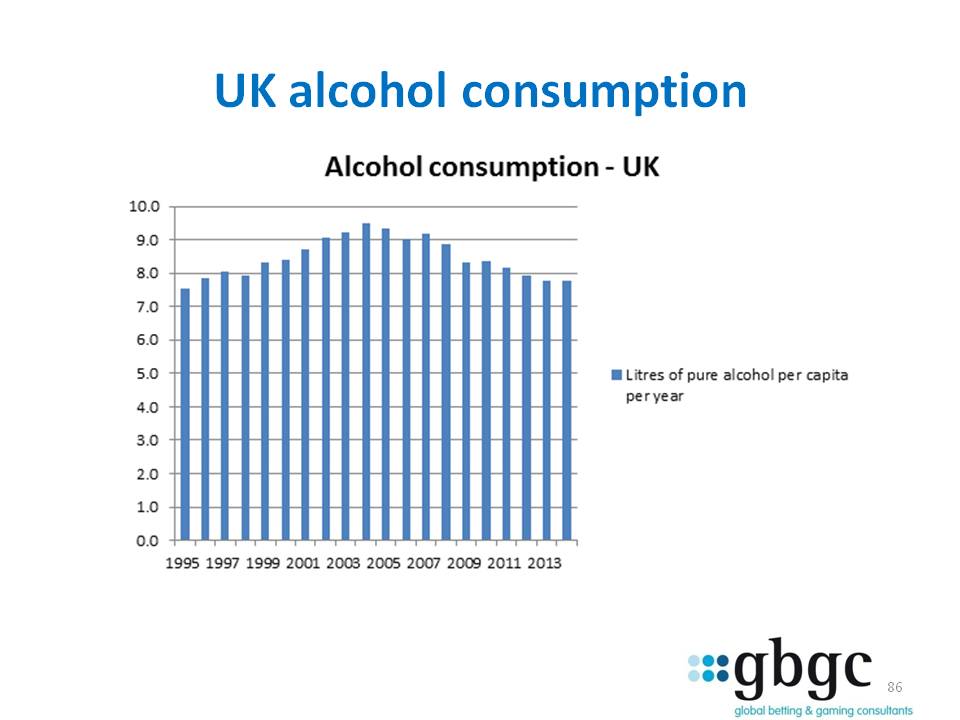 GBGC UK Alcohol consumption
Portman Group polled people to find out why. Forty six (46%) percent said it was part of a healthier lifestyle followed by thirty three (33%) percent citing changing social norms making binge drinking socially unacceptable.
The National Health Service is also playing its part. Every time I go to the doctor I am asked how much I drink. My normal reply is “Not enough!”
The key here is to understand what is going on. The Government does not like its citizens to drink too much alcohol; it ends up being a cost to the NHS, just like smoking. Incidentally, the prevalence of smoking is now down to nineteen (19%) percent from forty five (45%) percent in 1974 following outright bans in public places, taxation, and the fear of getting cancer.
By using tax to raise the price of the product you destroy its affordability.
So how will the Senet Group’s success or failure be measured? Will it be declining betting revenue for bookmakers? Or maybe fewer calls to Gamcare? The industry would like to see less problem gambling, but I am not sure that will be everyone else’s goal.
The betting industry has seen the tax rises and the bad publicity, and has volunteered the final strand, oversight by Senet Group, in response. Shops now display signs in the window telling people not to bet. There is a very good campaign on television persuading you not to bet if it isn’t “fun” anymore. A whole week was devoted to Gamble Aware week where bookmakers put signs in their front windows to tell people how to gamble responsibly, something akin to treating your customers like children.
If your local butcher places a note on beef and lamb saying ‘This product will clog your arteries’ would you buy it? In the first instance you might but over time the continual message to your brain will cause you to hesitate. Beef and lamb sales would fall.
If gambling is on the Government’s radar to be curtailed and it goes the same way as drink and tobacco many more betting shops will close. Embrace social responsibility, if you will, on the basis that you may consider it a good cause but do not expect to be financially rewarded because of it. For every one percent (1%) fall in revenue expect a four percent (4%) drop in net profits.