You are here::HomeGambling in Eastern Europe
Previous Next

This article is a version of the presentation given by GBGC manager Tihana Jurican at the Malta Igaming Seminar (MiGS) in November 2015.

Gambling revenues (GGY) in most Eastern European countries peaked in 2008 – the last year before the recession. Out of the 14 countries researched, there are just 2 exceptions, both Baltic countries – Latvia and Estonia – GGY peaked in 2007, so it started falling already in 2008. By 2014, most of our countries were far below the peak of 2008 when looking at gambling revenues. Only Lithuania and Montenegro had revenues slightly surpassing that of 2008. Poland was the worst hit, with revenue falling over 50% compared to the peak year, followed by Bulgaria with a 45% fall and Hungary with a 43% fall.
In all those countries the sector most hit were gaming machines outside casinos, which were banned in Hungary from 2013 and in Poland from 2016. The Bulgarian machine sector was also hit, but with higher levies and a smoking ban rather than a full ban. The effects of the crisis have been devastating to the industry, and they also brought new taxes and regulations along as government revenues fell as well. Our forecasts show that by 2019 only 7/14 countries will have revenues higher than in the peak year of 2008. Those are: Croatia, Czech Republic, Estonia, Latvia, Montenegro, Serbia and Slovakia.
Overall propensity to gamble by country
One of the ways to measure propensity to gamble is to look at share of gambling revenues in the country’s GDP. We have here taken UK as a benchmark due to its long tradition of gambling, unlike in Eastern Europe, where the sectors other than lotteries were either legalised or opened to domestic customers only in early 1990s. The graph shows that 6 countries have higher propensity to gamble than the UK, with one more country at almost the same level of 0.6% of GDP. Poland is the country with the lowest share of gambling in GDP, at 0.17%, which is mostly due to very low supply of land-based gambling premises and the Internet market that is in its infancy. On the other hand, Latvia, Slovakia, Slovenia and Croatia have very high propensity to gamble at 0.8% of GDP in 2014. 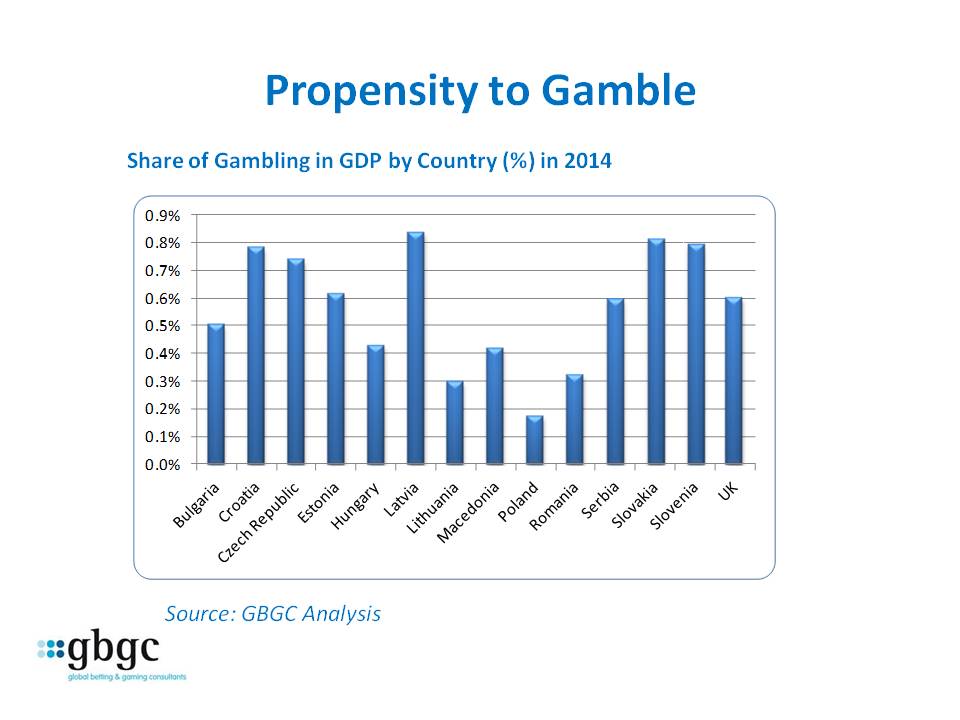 E-gaming overview
All the jurisdictions under consideration allow Internet sports betting and most allow Internet casinos. However, only half of the countries in our table have opened up their markets to foreign companies, which is unexpected given the fact that most of them are part of the EU, with Freedom to Provide Services among the most important rules to which they all agreed. Of those 7 countries, Poland, Serbia and Slovakia have no foreign licensees yet, usually because they only opened up the market recently. That means that only 4 countries, Bulgaria, Romania, Estonia and Latvia currently have foreign operators doing business there. Eastern European countries are still being targeted by large e-gaming companies from offshore, but only 5 countries have opted for ISP blocking.
Conclusion
E-gaming markets across the Eastern European region are opening up. They are still in their infancy, so there is still room for new brands. The growth is faster than in the established countries. But newcomers must be aware of complex and costly regulation and have to be patient as the legislative process usually moves very slowly – for example 5 years passed in Romania between the passing of regulation and issuing the first online licences.
A copy of the full slides for this presentation can be obtained by contacting GBGC.
By gbgcadmin|2015-11-24T00:00:00+00:00November 24th, 2015|Uncategorised|Comments Off on Gambling in Eastern Europe