GBGC Chart of the week – 7 October

You are here::HomeUncategorisedGBGC Chart of the week – 7 October
Previous Next

GBGC Chart of the week – 7 October

The opticians Specsavers joked on social media that it would be offering free eye tests for Premier League defenders after several high-scoring games over the weekend of 3-4 October.

It has certainly been a volatile start to the new EPL season, with goals galore. Over the course of a full season, an average of 52% of matches will have +2.5 goals.

After 38 games of the current season, 68% of games have had over 2.5 goals, hence the offer of free eye tests.

Just 8% of the 38 games have been draws. The average from the previous three seasons is 23%.

50% of matches had been away wins. The average from the previous three seasons is 31%.

Several suggestions have been given as explanations for this unusual start to the season:
• A lack of pre-season friendlies and preparation
• A lack of crowds causing less intensity in stadia and lower focus and concentration by players
• Declining standards of defending
• New laws on handball giving rise to more penalties (25 awarded in 38 matches)
• Less aggressive defending due to VAR reviews 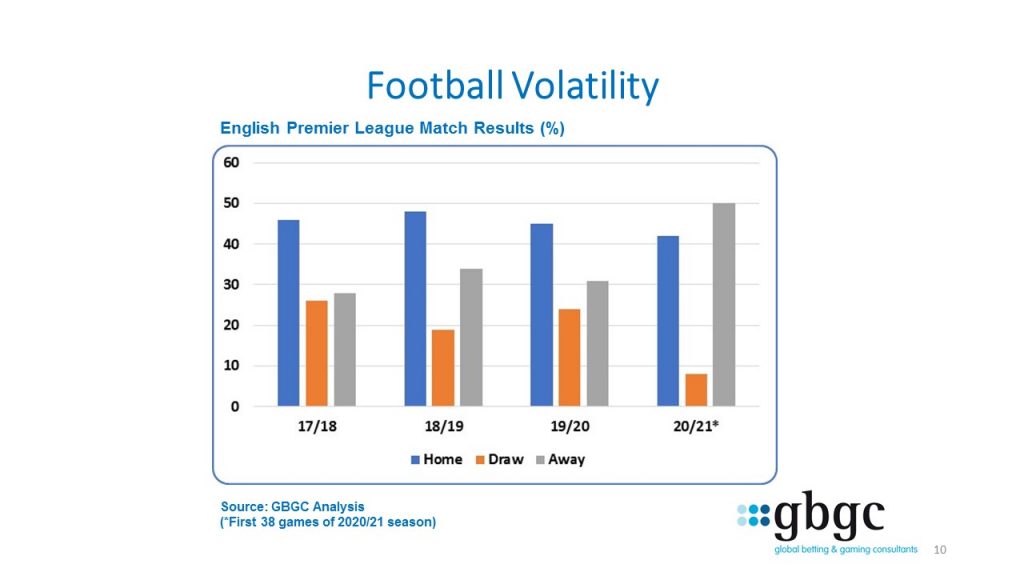 Subscribing to GBGC’s specialist gambling reports will enable clients to keep up to date with the fast-moving developments in the world’s gambling markets over the next 12 months.

GBGC’s comprehensive Global Gambling Report is in its 15th edition in 2020. In the new edition GBGC has extended the forecasts until 2025 and has given its view as to how gambling will fare in the post-COVID world. There are also updated reports for more than 250 individual gambling jurisdictions.