Demand and recovery in global gambling

You are here::HomeUncategorisedDemand and recovery in global gambling
Previous

Demand and recovery in global gambling

The gambling sector, along with the rest of the world, is continuing to face unprecedented challenges due to the ongoing Covid-19 pandemic. Retail gambling (with some lottery exceptions) was shut down in the initial lockdowns, followed by reopenings with limited capacity and, in some cases, a limited range of available services to maintain social distancing. There have now been second closures in various jurisdictions, from Hong Kong and the Philippines, via Romania and the UK to Florida and Manitoba, as the number of infections increased.

There has, however, been cause for hope. Some sectors have reopened with better-than-expected results. In the US, some new sectors have been legalised after states votes on the November ballot.

In the US, several sectors have shown stronger-than-expected recovery, despite the limitations in capacity. In South Dakota, casino revenues have grown YoY in all three months of Q1 2021 (July-September). The overall rate of growth for the quarter was 6.1% YoY. As a result, GBGC has increased its annual 2021 estimates from US$115m to US$137m.

In Louisiana, a strong July (also the first month of fiscal year 2021) helped put the Q1 total revenues for gaming machines in bars, truckstops and racinos at 2.2% more than in the same quarter of fiscal year 2020, despite annual falls in both August and September.

In Ohio, both casinos and racinos had growing revenues in each of three months after reopening in July 2020, with rates ranging from 2% to 7% YoY for racinos and from 5% to 22% for casinos.

The US has also passed gambling expansion in several state ballots during November elections.

South Dakota voters approved sports betting, with a 58% margin. Sports betting will be allowed for Deadwood casinos and Native American casinos, with the details to be determined by the legislature in 2021.

Louisiana voters also approved sports betting in 55 of 64 parishes, representing most of the state population, including all major metropolitan areas. The details are again up to the legislature.

Maryland voters approved sports betting with a 66% majority. The legislature will determine the details in the coming months.

After many years of trying, Nebraska voters overturned a ban on casino gambling in the November elections. About 2/3 of the voters were in favour of three constitutional amendments allowing casinos at six licensed horse racing tracks.

Virginia voters allowed four casinos in the November ballot, in the cities of Bristol, Danville, Norfolk and Portsmouth. The fifth casino, in Richmond, will be on the 2021 ballot.

Voters in the state of Colorado approved two gambling amendments. The first one gives only local communities a say in bet limits and games available in casinos (previously a state-wide vote was required), while the second aims to boost the charitable bingo industry by allowing charities to pay workers operating the game and reducing the number of years a charity has to be in existence to apply for a bingo licence from five to three years. This will lead to an increase in bet limits in the casinos (currently US$100) and add new games to the mix, as well as help the declining bingo industry. 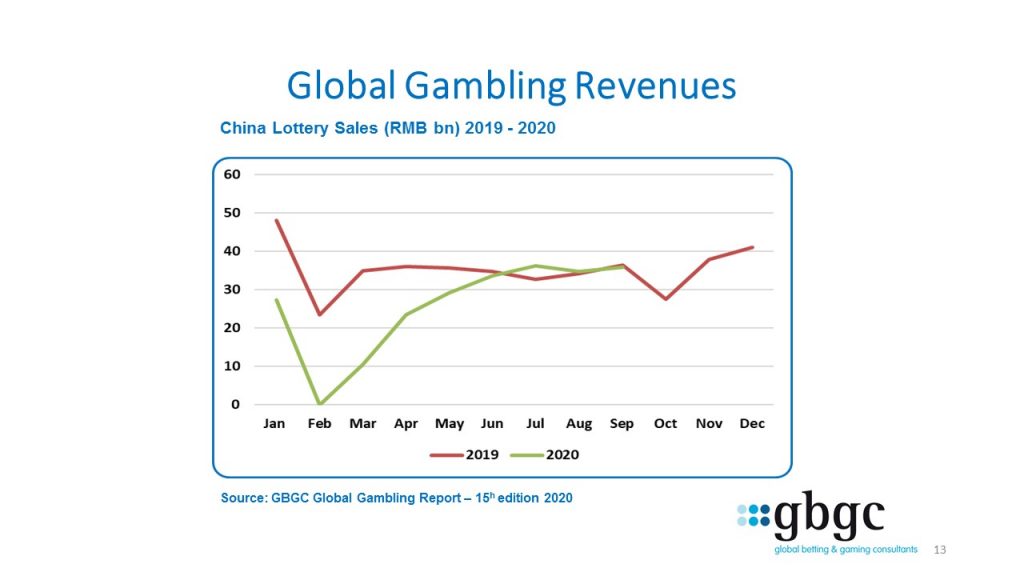 Once of the first countries to lockdown during the pandemic was China. The Chinese lotteries have shown a V-shaped recovery in sales, with monthly figures surpassing those of the same month of 2019 for July and August.

As GBGC predicted in its G2E Asia webcast, there is significant pent up demand for gambling services once the lockdowns have run their course.